HomeSportSouthampton 0-1 Newcastle: Joelinton scores as Magpies get one foot in Carabao...
Sport

Southampton 0-1 Newcastle: Joelinton scores as Magpies get one foot in Carabao Cup final 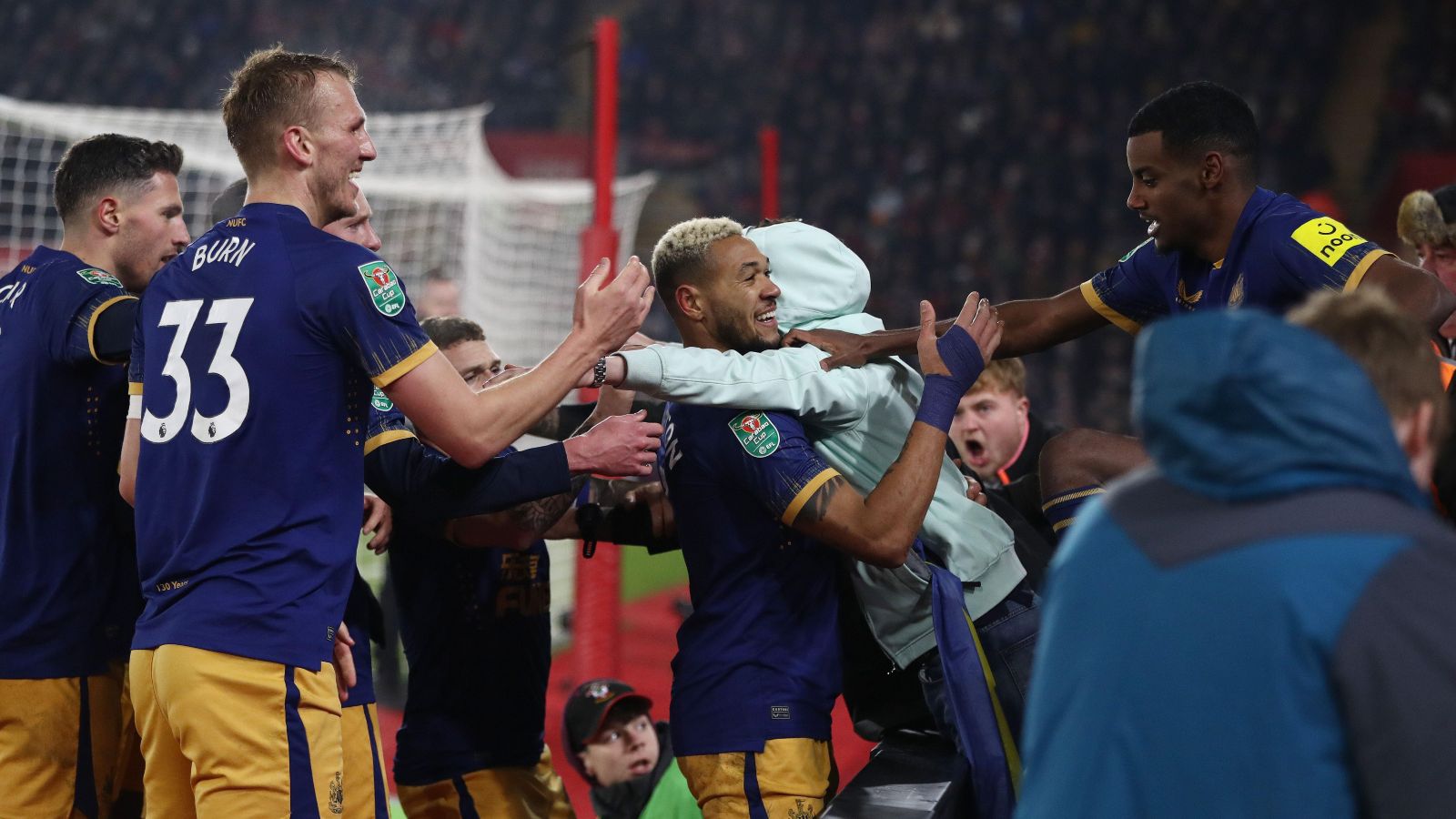 Joelinton had a goal controversially disallowed and missed a sitter before scoring the winner as Newcastle won their Carabao Cup semi-final first leg against ten-man Southampton.

The Brazilian secured a 1-0 win for the Magpies by burying a low cross from substitute Alexander Isak with 17 minutes to go on a breathless evening at St Mary’s.

Saints thought they had swiftly levelled through Newcastle academy graduate Adam Armstrong but his bundled effort was ruled out for handball following VAR intervention.

Joelinton had a first-half effort controversially chalked off for an adjudged handball, while he wastefully blazed over with the goal gaping early in the second period.

Southampton finished a frantic encounter with 10 men after defender Duje Caleta-Car was dismissed four minutes from time for a second bookable offence.

The hosts had sufficient chances to head to the north-east level but Nick Pope was in inspired form to stop Che Adams, in addition to Armstrong’s disappointment against his boyhood side.

Newcastle arrived on the south coast with manager Eddie Howe urging his side to go a step further as the club chase a first major domestic trophy since 1955.

Howe’s men had the better of an uninspiring opening period which lacked quality and chances but contained a major talking point.

Newcastle midfielder Joe Willock was at the heart of the most promising openings.

The former Arsenal player twice fired woefully over when unmarked, before sparking the contentious 39th-minute incident by bursting clear on the left and cutting inside Lyanco to force a low stop out of Saints goalkeeper Gavin Bazunu.

VAR was introduced for this round of the competition but, despite serious debate about where the ball struck Joelinton, the onfield decision was not overturned.

There were then worrying scenes when Southampton winger Moussa Djenepo was forced off after a heavy collision with visiting goalkeeper Pope, to be replaced by Armstrong.

Newcastle were resounding 4-1 winners on this ground in the Premier League in November, leading to the dismissal of former Saints boss Ralph Hasenhuttl.

Miguel Almiron opened the scoring that day and he created two golden chances early in the second period as the away side attempted to eradicate that first-half frustration.

Joelinton somehow fired over in the 53rd minute following Almiron’s neat one-two with Sean Longstaff on the right, before Sven Botman hit the side-netting from a more difficult opening a minute later.

The England keeper underlined his international credentials by twice denying Adams, the first time after the Saints substitute was sent clean through by Alcaraz, before Newcastle snatched the advantage.

Sweden striker Isak burst away from Lyanco on the right and delivered a perfect low cross for Joelinton to finally put his name on the scoresheet.

Newcastle’s sold-out away end was still revelling in the prospect of a first Wembley cup final since 1999 when Southampton thought they had levelled.

Armstrong scruffily finished after Samuel Edozie turned the ball across goal but the joy was cut short by Stockley Park.

Tempers then threatened to boil over in the closing stages.

A coming together between Bruno Guimaraes and Lyanco sparked a mass brawl, before Caleta-Car, cautioned for scything down Almiron in the first half, was sent off for upending Allan Saint-Maximin.

Isak came close to doubling the advantage in added time but hit the side- netting after rounding Bazunu.

Newcastle now have a fixture-free week to prepare for the return meeting, while Saints go to St James’ Park following an FA Cup fourth-round clash with Blackpool.

READ MORE: Do Casemiro and Rashford make a Premier League team of the season so far?