The result, Villa’s first victory on the ground since 2008, put a huge dent in the Toffees’ Champions League hopes.

And while it only moved Villa one place up to ninth the real benefit was to the Euro 2020 hopefuls who were able to showcase their talents to the watching Southgate with Watkins and Pickford, in particular, impressing.

The Villa striker, who made a goalscoring international debut against San Marino in March, looked a handful throughout and was unlucky not to add to his 15th club goal of the season which opened the scoring.

That he did not build on that was partly down to Pickford, who kept Everton in the game to allow them to reach half-time level thanks to Calvert-Lewin’s 20th of the campaign.

But in terms of style they were outdone by Anwar El Ghazi’s 80th-minute winner which he curled into the top corner after sweeping crossfield move.

Watkins and Calvert-Lewin now have 28 Premier League goals between them and are looking like able deputies to Harry Kane at this summer’s tournament.

Everton were lacking an adequate stand-in for James Rodriguez, though. H was replaced in the starting line-up after a suspected calf strain during the warm-up, with Alex Iwobi a poor imitation.

Things got worse for the hosts after just 13 minutes when Mason Holgate fluffed an attempted backpass under pressure from Watkins and the Villa striker pounced to slot past Pickford despite being partially brought down by the recovering defender.

The goalkeeper got close enough to Watkins to smother his next effort as the forward raced on to Ezri Konsa’s long ball.

And the hosts drew level when Calvert-Lewin lost former Everton midfielder Ross Barkley to power home a header from Lucas Digne’s corner for only his fourth goal in his last 17 Premier League matches.

The same combination almost then put Everton ahead but Emiliano Martinez saved the diving header.

Watkins was proving even more of a threat but he found a worthy opponent in England team-mate Pickford, who denied him and then tipped Bertrand Traore’s rebound on to the crossbar, before he had a shot deflected just wide. 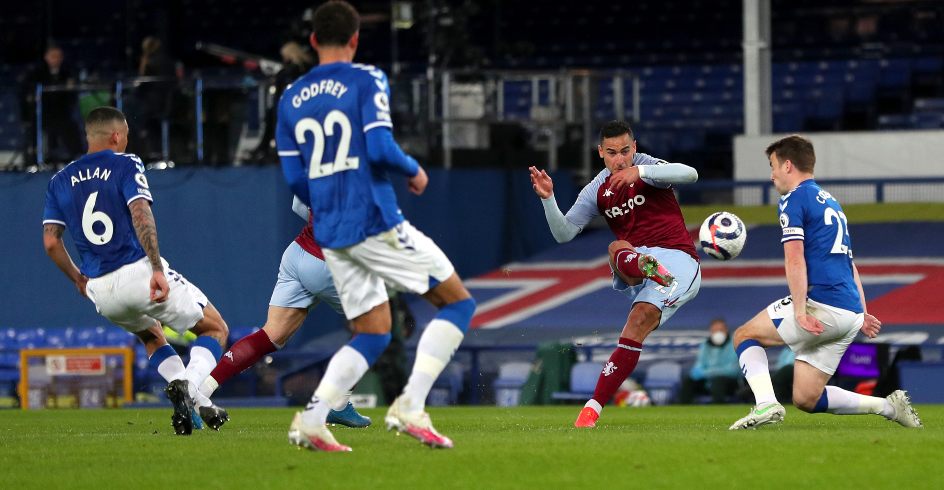 The forward’s intelligent use of space and his willingness to chase seemingly lost causes kept Holgate and centre-back partner Ben Godfrey on their toes but it was Barkley who almost put Villa ahead again when his low drive hit a post with Pickford this time beaten.

Everton improved slightly from an attacking point of view after the break but on more than one occasion manager Carlo Ancelotti could be heard bawling at his defence after another lapse offered up a chance, usually to Watkins.

Their record of winning just once in the last 26 league games in which they had conceded the first goal rarely looked like changing with Richarlison particularly ineffective as he went a seventh match without a goal.

The Brazil international was playing his 100th league match for the club but never looked like adding to his 32 goals.

With the match seemingly meandering towards a draw El Ghazi struck after Lucas Digne gave the ball away on halfway. Traore quickly switched it to the opposite flank where the Dutchman cut back inside to caress a right-footed shot into the top corner and extend Everton’s woeful home league run which has seen them win just one of the last 10.

Hurricane Ian: If the NFL has to move the Buccaneers-Chiefs game from Tampa Bay, why not New England?

Predicting the 11 Most Impactful Jacksonville Jaguars in 2021