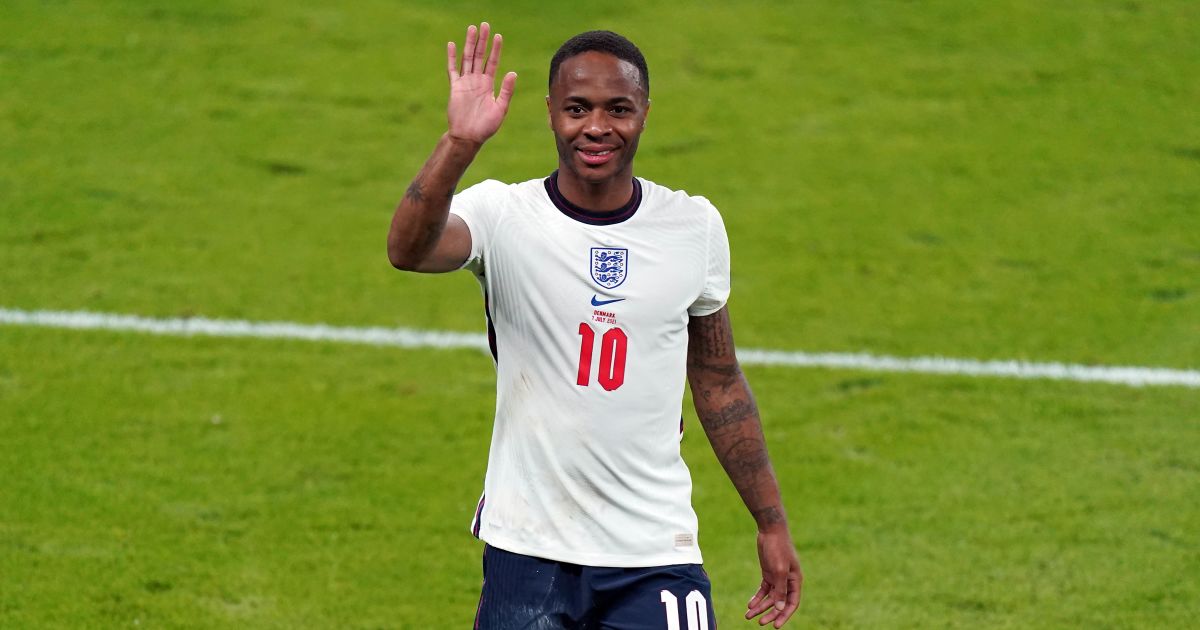 England are in their first ever European Championships final. Over 120 minutes against a very good Denmark side, they deserved it. Especially Harry Kane, but especially Raheem Sterling.

There were undoubtedly a few Pickford moments in there, and he finally conceded a goal in his sixth game. But he’s already sure to end the tournament with the Golden Glove having kept five clean sheets and criticism of him for the goal was a touch harsh. “Keepers should save free-kicks if they’re not right in the corner,” is slightly dated. That ball moved in at least three different directions and Denmark had cleverly placed blockers in the wall to keep Pickford unsighted for as long as possible Could he have done better? Yes, but it was hardly a catastrophe. But I think we were all quite happy to hardly see him for much of the last 40-odd minutes.

An epic stint. His pace was eye-catching in the early stages as he got across with his recovery pace to snuff out the threat of Damsgaard after England’s centre-backs had been pulled across the pitch. But he kept doing that again and again and again for 120 minutes. Just a fantastic performance, and a comprehensive winner of his tussle with Maehle, which was always going to be one of the night’s key battles. It was a no-contest.

Harshly booked for his only foul of the night when going up for a header – while Thomas Delaney sauntered off uncautioned on 87 minutes with five cynical fouls to his name – but really that only made the series of perfectly timed tackes and interceptions he produced while on The Disciplinary Tightrope all the more impressive. Five interceptions to go with five clearances and two tackles on what was without doubt England’s toughest night of the tournament. Probably behind only Sterling and Kane as England’s best and most important player of the night.

His iffiest performance of the tournament, but to be fair he had set himself a very, very high bar. Occasionally found himself pulled out of position – especially in the first half – by Denmark’s lively movement but as the Danes tired, his night got markedly easier and less stressful. At least that’s how it looked anyway.

Conceded the foul for Denmark’s opening goal, which was frankly an absolute nonsense given the congestion and tussling from both sides but what could have become yet another oh so nears was reduced to a footnote. Generally: excellent again.

Uncharacteristic error let Denmark in for their first chance, compounded by Pickford’s bungled clearance. Took him a good 20 minutes to get a handle on the pace of the game and the urgency of the Danish press. But in the second half he was superb. Snapping into tackles and playing those progressive passes that have been the hallmark of his tournament. Ran 15km, which is a really long way.

The first 25 minutes were surely his least certain spell of the game as time and again he found himself surprised by the presence of Danish boots nipping at his heels every time he got the ball. Grew into the game as Denmark tired but not as imperious as he had been in previous matches. There’s no chance we’re going to start criticising Sir Gareth, but Henderson for Rice was a change that could have happened 25 or 30 minutes earlier than it did.

Wasn’t quite coming off for him but the runs and the movement and the persistence were always there and his work to create the equaliser was superb. He really is an astonishing footballer already, obscenely mature and composed. That he produced his very best moments at the times when things got fraught for England – the first 15 minutes against Germany and after Denmark’s goal here – says much for his character. So, so good already and so, so much more to come.

Good early run won a corner, but his tackle to prevent Denmark getting a second cross into the box after a corner of their own a few minutes later was another reminder of the myriad small things he does that managers so adore. Didn’t catch the eye the way Kane, Sterling or Saka did but put in all manner of work to allow them to shine. Plenty of smart, clever passes to get that front trio involved. Set-piece delivery again a touch disappointing; it’s such a huge weapon for England when they get it right. 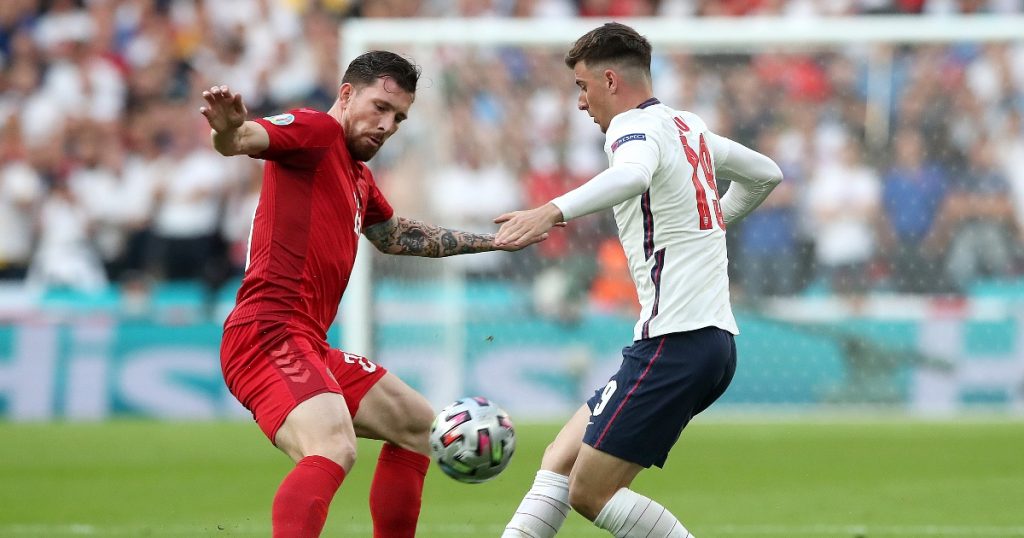 Utterly, utterly, magnificently stupidly brilliant. Involved in everything England did yet again. Almost got on the end of an early Kane cross. Should have done better than scuff straight at Schmeichel having cut inside after another Kane pass. And that was just the first 15 minutes. Denied by a fine Schmeichel save having again been found by Kane but then scared the magnificent Kjaer into scoring England’s equaliser. His rapport with Harry Kane is incredible, but there was no doubt who was the star of the show tonight. And that was with Kane having one of his best nights in an England shirt. Whatever chats there may be about the softness of the decisive penalty he won, the fact is he was there still full of running, still full of verve and menace deep into the extra period. Sterling completed 10 (ten) dribbles in that game; the next highest was two. On a night full of heroes, one stood tallest. Just don’t expect to see that fact reflected on tomorrow’s back pages.

Almost played in Sterling with a whipped cross from the right that Spurs fans have seen and Heung-Min Son has profited from a hundred times before. Had an absolutely huge 10 minutes after the Denmark opening goal. His leadership is one of example, of deed, and he singlehandedly chilled a frantic England team the f*** out. We’ve waited to find how England would respond to falling behind; here was the answer. He won a clever free-kick that Sterling almost got over the wall, he put in a great cross that Sterling almost got past Schmeichel and then played an absolute sex of a pass for Saka to create the equaliser. This was Kane in full “Tottenham Kane” pomp, popping up all over the pitch to win a pressure-easing free-kick here, play a defence-splitting pass there. Also managed to take his worst penalty for about four years and still get away with it thanks to a no-look rebound conversion. Now level with Gary Lineker for most major tournament England goals and also has a genuine chance of winning some proper silverware at last – while also sidling off with the Golden Boot having failed to score a single goal in the group stage. 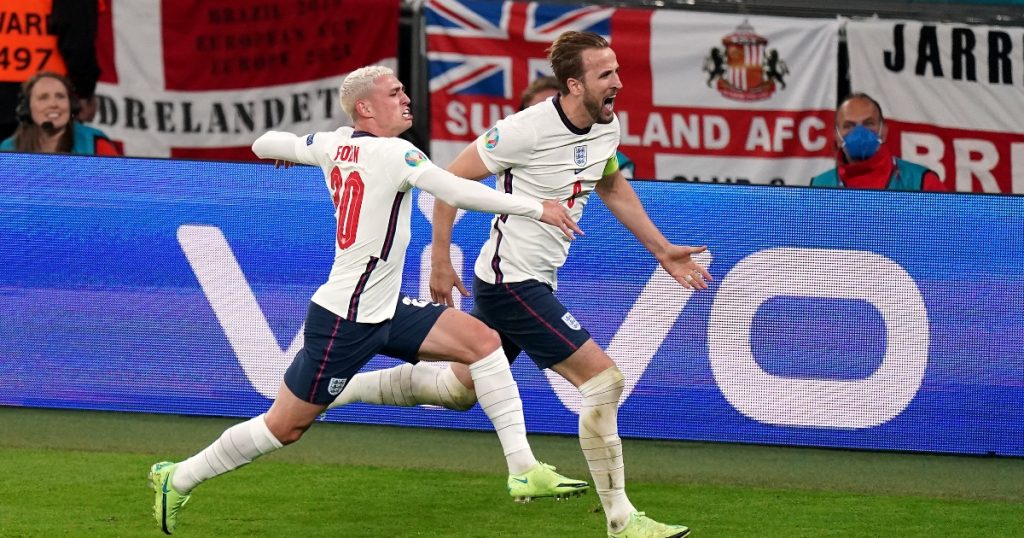 If we’re going to be super harsh, there wasn’t quite the end product to go with the movement and menace. The Clamour has died down in recent weeks and this didn’t do much to reignite it. He was fine and he won some useful free-kicks but ITV’s incredulity – “That has to be an injury, right?” – when Gareth Southgate once again got his great big testes out and whacked them on the table by removing Grealish for the second period of extra time was misjudged. Gareth Knows, and we should all have accepted this by now.

Could have been on a bit earlier, although given how decisively Southgate won the subs battle we won’t complain. Did exactly what you’d expect him to do when he did come on.

Pretty quiet actually after replacing Mount early in the extra 30 minutes. But did nothing much wrong and let’s face it, being on the pitch when England finally reached another major final must have been pretty awesome.

Southgate’s final bit of tactical showmanship. Early worries in that second period that England might sit deep with a back five and invite the weary, shattered Danes on soon passed, and with England oleing their way to a 54-pass two-and-a-half-minute move in the final stages it was vindicated. Trippier was prominent in that particular passage of play that will inevitably launch a thousand thinkpieces. It was an eye-catchingly un-English end to this most un-English of achievements.

What now for Rodgers? Separating fact from fiction on the unvaccinated QB’s next steps