Some walked straight into Jose Mourinho’s trap after the north London derby. And did Pierre-Emerick Aubameyang question Arsenal’s ‘integrity’? Did he balls.

As Jose Mourinho spouted some absolute bollocks about the Arsenal penalty in an attempt to divert everyone’s attention away from another poor Tottenham performance against any kind of quality opposition, he would have known one thing: The Sun would fall for it hook, line and sinker. They would happily stroll straight into that trap and make it all about the penalty. Why think/cook for yourself when you can be handed your back page like a particularly sh*t microwave lasagne.

Here is tomorrow’s @SunSport back page:

Jose Mourinho slams Michael Oliver for awarding Alex Lacazette’s penalty, insisting: Only a Gooner could have given ithttps://t.co/vHh7kkFhxk pic.twitter.com/kHACN5qUTY

Note the quote marks around ‘Only Arsenal season ticket holder gives penalty for that’ as if that’s actually what Mourinho said (it wasn’t). And note the ‘AFTER‘ in capitals and bold lettering as if smashing into somebody AFTER the ball was played precludes it from being a foul.

Mark Irwin leans into the narrative by writing this:

‘Quite how referee Michael Oliver and VAR Paul Tierney agreed it was a penalty is anyone’s guess, because Lacazette had already mishit his shot when he was caught by Davinson Sanchez.’

It’s not ‘anyone’s guess’, Mark. And thankfully, former referee Mark Halsey and his ‘guess’ are just a few inches left in The Sun and he writes that ‘anywhere else on the pitch and you could argue that the ref would blow’. He also said that Tierney ‘did not see that as a clear and obvious error so did not get involved’.

Call us crazy but should a football journalist not know the rules – first about what does and does not constitute a penalty, and secondly about what VAR actually does. Or at least defer to those who do.

But of course the small matter of football laws – and, to be fair, football itself, as it’s worth noting that the name of Arsenal scorer Martin Odegaard appears neither on the Sun back page nor in the opening 18 paragraphs of Irwin’s ‘match report’ – comes pretty low down a list of back-page options when Mourinho has handed you your cold dinner on a paper plate.

The Spurs mafia
Mark Irwin is not the only one baffled by the penalty, but he might well be one of the only ones who has never played for Tottenham…

‘Alexandre Lacazette admits he was ‘lucky’ to win the crucial spot kick in north London derby from Davison Sanchez’s wild tackle after he fluffed his shot… as Jamie Redknapp calls the incident ‘reckless but not a penalty” – MailOnline.

‘Michael Owen in agreement with Gary Lineker over Arsenal vs Tottenham controversy’ – Mirror.

And what, pray tell, do Jamie Redknapp, Jermaine Jenas and Gary Lineker have in common? And no, there’s no point at which citing Michael Owen strengthens your case.

Nobody understands me…
Talking of Jermaine Jenas. Sorry but this makes you look like a right dick.

Of your own accord

Online football journalism is weird. The Sun website actually lead not on the penalty decision but on Pierre-Emerick Aubameyang on Monday morning. That’s not weird in itself but this is the headline:

After you have finished tutting at ‘breaks silence’, note the quote marks denoting that this is an ‘according to’ story. And on this occasion we learn that ‘according to the Mail, Aubameyang could now face a hefty fine for his actions’.

The weird part? Paul Jiggins literally wrote about that hefty fine in The Sun.

This is not an unusual situation. Newspapers keep a whole coterie of expensive dogs but increasingly choose to mimic the bark of next door’s dog instead. Have we reached an odd and confusing juncture where ‘according to’ stories actually have greater traction than having the story yourself? 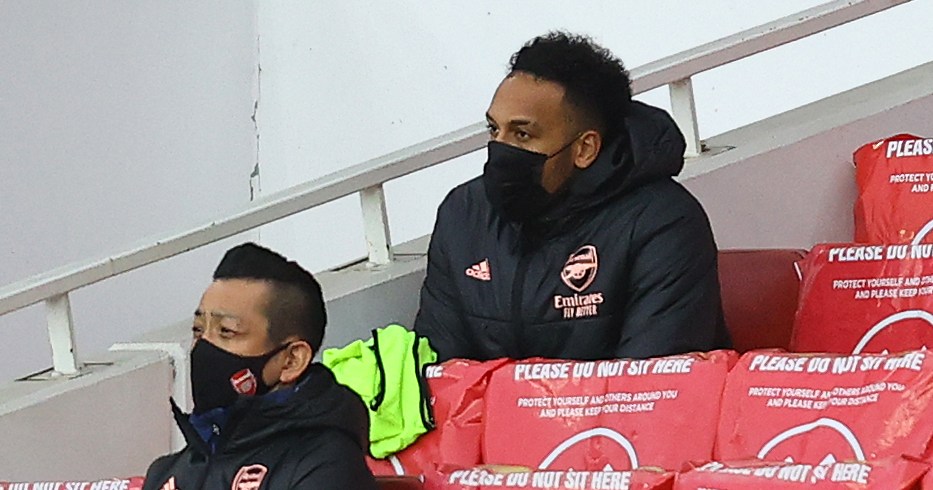 Reality show
Most media outlets decide that Aubameyang is the big story, but as usual it is the Mirror website that sinks the lowest:

It would be wrong to say that it is implied that Aubameyang questioned Arsenal’s “integrity”; there’s almost no other way to read that headline. And the Mirror absolutely know that.

As we know, Aubameyang was actually dropped for being late. So where did this “integrity” stuff come from?

Here. It came entirely from here:

Arteta was right to drop Aub in my book. Regardless of the result. The integrity of the team and its values have to be maintained. No one bigger than the group. It has to be that way IMO @Arsenal

The only question is why we are still surprised.

Opening line: ‘Arsenal boss Mikel Arteta remained coy when quizzed on Pierre-Emerick Aubameyang’s absence from the side after Sunday’s north London derby, but hailed the 31-year-old as an ‘incredible guy’ and one of the club’s most important players.’

Oh. That really is quite the update.

Surprise, surprise…
From The Sun’s match ratings on 5/10 Bukayo Saka: ‘Did not have his best game, but it was still a surprise to see him dragged at half-time.’

Recommended reading of the day

Newcastle shine thanks to aptly-named goalscorer and phenomenal Bruno Guimaraes